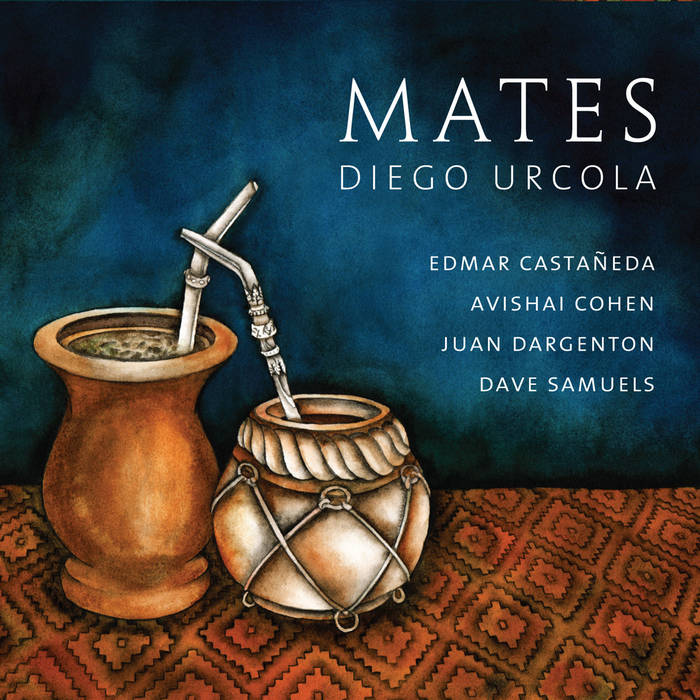 The drinking of mate, a beverage infused from ground yerba mate leaves and water, has been a South American culinary and social tradition for centuries. The sharing of the calabash that contains the hot drink and the consequential interaction between friends has become the social norm, especially in Argentina.

The friendly tradition of drinking mate served as inspiration for Argentinean born, New York based trumpeter Diego Urcola. For his playfully titled new recording Mates, Urcola wanted to mirror this give and take between friends (or “mates”) with that of the musical duet. To achieve this, the trumpeter recorded a number of intimate meetings with a handful of his closest musical associates, including bassist Avishai Cohen, vibraphonist Dave Samuels, harpist Edmar Castañeda and bandoneón player Juan Dargenton.

Born in Buenos Aires, Urcola began studying music early on and, after taking up the trumpet, quickly moved through the conservatory ranks in Argentina. He moved to the United States to study at the Berklee College of Music, in Boston, and later received his master’s degree at CUNY/City College-Queens, in New York City, where he has made his home and career. Urcola has become an essential member of a number of fantastic ensembles, including a number of Cuban clarinetist Paquito D’Rivera’s projects, the Dizzy Gillespie Alumni Allstars and Guillermo Klein’s Los Guachos.

Bassist Avishai Cohen has been one of Urcola’s longtime musical collaborators and friends. They originally met when Urcola moved to New York in 1991 and since then they have played in a variety of situations, including on two of Urcola’s earlier recordings Libertango and VIVA. It was only natural that Cohen, who has become a jazz luminary after a successful stint with Chick Corea, should be involved on the new recording.

Urcola has played with the highly regarded vibraphonist Dave Samuels for years. Samuels has become one of the leading voices on his instrument and has played alongside masters like Gerry Mulligan, Oscar Peterson and Chet Baker. Urcola and Samuels first worked together and developed a rapport as members of the Caribbean Jazz Project. Later, Urcola featured the vibraphonist on his VIVA recording.

The musical relationship between Urcola and the astounding Colombian harpist Edmar Castañeda began when they were both featured members of Paquito D’Rivera’s Panamericana ensemble. The two have subsequently continued to work closely on a number of other projects.

Urcola first met the talented tango composer/pianist/bandoneón player Juan Dargenton when he was recording his Soundances album. He was impressed by Dargenton’s extraordinary ability to play standard jazz repertoire on the bandoneón. Urcola was so impressed that he had to have Dargenton on his duet recording.

The album begins with Urcola and Cohen performing an upbeat folkloric piece “Eleguá,” a tribute to the most important Santerián orisha (god), who is the owner of all roads, crossroads and doors. Pianist/composer Richie Beirach’s moody “ELM” is dramatically performed by the colorful bandoneon of Dargenton and Urcola’s lush, muted trumpet. Castañeda’s shimmering “Colibri,” meaning ‘humming bird,’ has the harp and trumpet fluttering and flitting around each other while the solemn take on Egberto Gismonti’s “A Fala Da Paixão” balances the restive tones between Samuel’s vibes and Urcola’s controlled trumpet. Cohen’s “Gadu” has the bassist and trumpeter in a synchronized Latin dance.

Urcola and Castañeda’s take on the Argentine folkloric composer Ariel Ramírez’s “Alfonsina y El Mar” is stoic and beautiful. “Preludio #3” is a tango written by legendary tango composer Roberto Pansera and is a moving vehicle for Samuel’s vibes and Urcola’s intricate lines. Urcola’s own “Milonga Para Paquito” is an Argentine tribute to Paquito D’Rivera with Dargenton playing dynamic bandoneón alongside Urcola’s dancing horn. Another Cohen original, “Float” is introduced by Urcola’s plaintive trumpet then joined by Cohen’s singing bowed bass. Samuel’s “Samba Pa’Dos” is a tricky, interlocked exercise between marimba and trumpet.

Gene de Paul’s standard “You Don’t Know What Love Is” is an introspective study for Urcola with Dargenton’s subtle and effective bandoneón coloring. The French-born, Argentinean tango legend Carlos Gardel’s lament “El Día Que Me Quieras” is heart-wrenchingly rendered by Urcola and Cohen. Castañeda is featured on his “Colombian Dixie,” a gripping, witty composition highlighting the unique mixture of jazz and South American folkloric music. Closing the album is the trumpeter’s “Final Waltz,” with a lovely yet brooding bandoneón and trumpet.

Accompanied by a handful of his closest musical compatriots, Diego Urcola has delivered a tremendous document infusing the musical traditions of jazz, tango and Latin and South American folk roots on his new album, Mates.

Bandcamp Daily  your guide to the world of Bandcamp